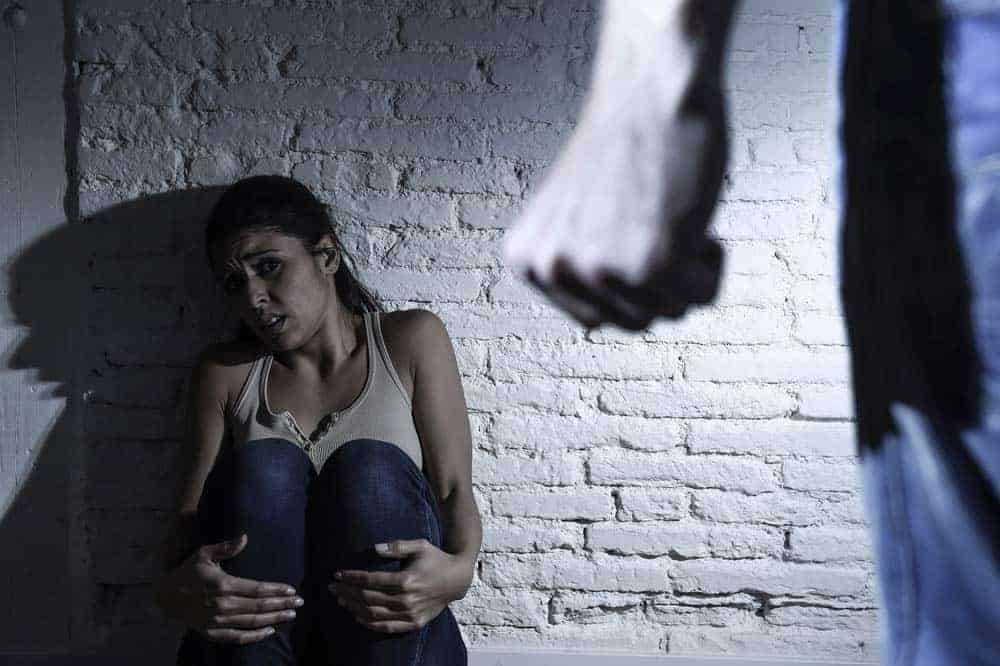 You have to know how to recognize an abusive relationship and an abusive man to know with whom you are dealing with. And arguably the best way to assess someone is to take a sneak peek into his private life. No cameras, no private detectives, no digging through the garbage. All you need to do is to listen and observe.

In simple words: a man who is abusive towards his wife is nothing but a gutless chickenshit.

Do you really want to do business with that kind of man?

Do you really want to have anything with him?

The psychology of an abusive man who takes it out on his wife tells you two things:

2) He is scared to show some ballz, initiative, and to face the challenge in real life so he compensates by beating up or psycho-abusing his wife.

It’s the type of a man who will always bitch and moan trying to make excuses to avoid doing something.

Consequently, his bank account balance is miserable and he has the habit to drink few more shots than normal – “just to relax.”

You really don’t want to do anything with this type.

How to recognize the prick in an everyday communication

His wife will hardly comment on anything and even if she becomes relaxed due to the effect of alcohol, she will carefully choose her words.

You will also notice how she looks at him after each of her statements or sentences. But that look will not be that warm look of love. You will see fear and insecurity in it.

Even if you are uncertain about the cues, there is a neat trick to obtain the solid proof of it.

Whenever you hear a woman claiming that she enjoys riding her man more than anything else; be sure that she feels inferior for the most of the day and by riding his dick she’s compensating for that. Because being on top is being in control.

Your wife, for example, likes to be grabbed firmly by her ass and fucked hard from behind. Thus, you two are equal. It’s that simple.

Why is he abusing towards his wife

She is the only person who will allow that kind of behavior and his home is the only environment where he can practice superiority in some deviant sense.

Outside his secure zone, he’s good for nothing.

The man probably uses a lot of loud macho horseshit trying to cover his obvious insecurity.

He is a total failure in every aspect of his life regardless of the superficial appearance of his success.

Deep inside he is a coward and that success is most likely built on backs of others.

And if you challenge him in any way or try to mock his obvious attempts to cover his insecurity; the only thing you’ll do with that action is bringing more pain and suffering to his wife.

Some men never develop the way they should. They shy away from any kind of risk and are not able to confront with anyone or anything.

Before he engages in a serious relationship there is no way to predict this kind of behavior because it is disguised by his youthful enthusiasm.

But once he faces the reality of the life where his mother is not there anymore to bail him out, he’s stuck. His instincts simply cannot surface and slowly but surely he is transforming into a beast. Guess who is the prey?

Do you, perhaps, recognize yourself in this?

If any of this applies to you, it’s time to reconsider your perspective.

You are well aware that this kind of behavior will backfire sooner than later. You will end up alone and most likely hang out with Mr. Daniels quite often.

So what do you do? How to become the man you are supposed to be?

The cause for this kind of behavior can be found in your closest social environment. Simply put, the overcontrolling mother and the abusive father most likely killed your progress.

Luckily, it is something easy to deal with.

You only need to integrate a few new habits into your life and you’ll successfully reprogram your behavior.

Because you and I both know that you feel like shit after you cure your frustrations on your wife.

Make a habit of getting up early in the morning – at the same time every day – and spend 30 minutes running, doing crunches and push-ups.

Over the short period of time, you will introduce a military type of discipline into your life and change your character. You will start seeing the opportunity where you saw the risk and danger before.

Stop with the drinking and engage in charity from time to time. Helping others does wonders.

In no time — in a matter of just a couple of months — you will emerge as a different man.

The man who is perfectly capable to face every challenge of the life with ease.

Work on yourself and develop. Break through the cocoon and evolve. Be the man with the ballz!.

Learn how to Develop Business Mind and set your life on a growth trajectory path.