Home » Blog » What it Takes to Be a Leader 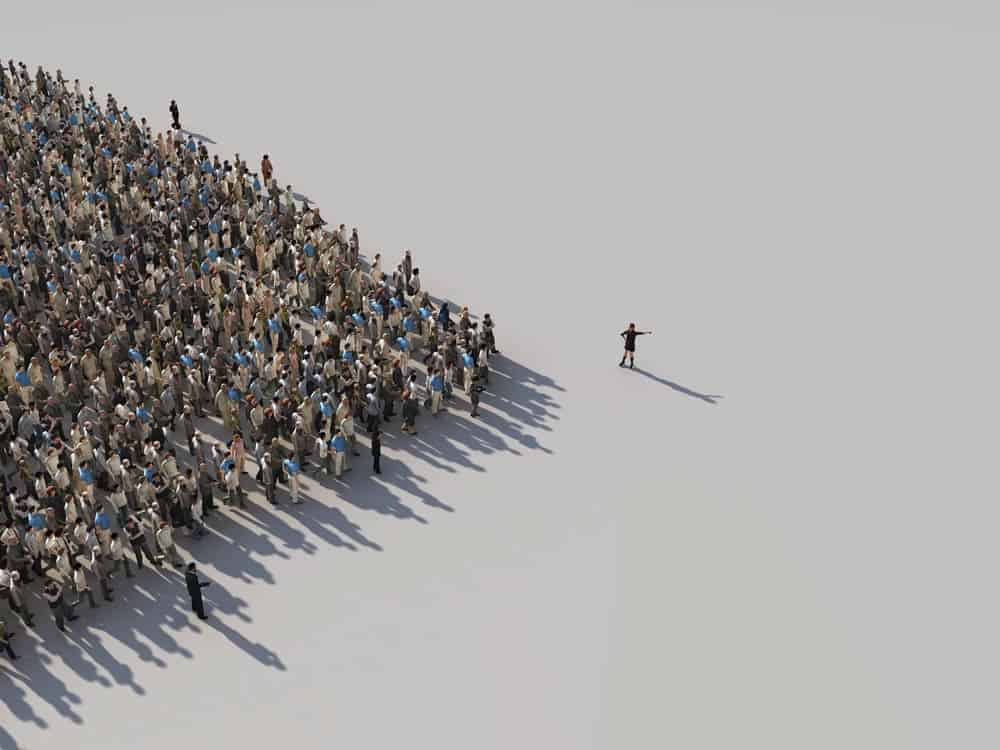 Leadership is a biological feature rooted in our deepest sense of belonging and safety. We actually feel the leader.

The question is what makes the leader? What is so special about someone that enables him or her to become a leader?

What is so magical about Martin Luther King Jr. or Steve Jobs?

They possessed the ability to present their deepest emotions, passions, and beliefs in an understandable way.

It doesn’t sound like much, doesn’t it? Everybody could do it.

Why do you love your wife?

You don’t know the answer. You sense it.

Talking about how great she is, or how she’s always beside you, how she supports you, and how she looks forward to seeing you, is like describing the house dog. It just isn’t it.

Steve Jobs, on the other hand, was able to describe it.

Jobs was, without any doubt, one of the greatest leaders.

His approach, beliefs, and consistency in following his vision opened doors for others to invest their minds and their time into the company.

Unlike Microsoft’s employees who wonder every morning about the next move from the Apple, these just don’t give a fuck about what others are doing or will do.

It’s because they feel they belong to something greater than they are.

That they are serving their community.

Steve Jobs managed to implement that mentality and instead of a simple high-tech company like thousands of others around the Globe, he created a community; a tribe.

And it’s a big ass tribe.

Why do people gather around one person?

In a contemporary sense, we are joining the groups most similar to who we truly are. The groups that are the easiest to identify with.

It’s the way to express ourselves.

We will dress accordingly, we will share the same enthusiasm and same agendas, and we will spread the word.

But it all starts gaining the momentum because of one man and his vision, his beliefs.

As we said, this feature of basic human behavior is rooted in our most primitive sense of safety and security. It dates from the times of the caveman and first functional human communities. That’s the birthplace of the leader – the alpha male.

Alpha had the best seat, the best view, and he always ate first, picking only the best pieces for himself. And nobody complained about it. On contrary, the rest of the community gladly stepped back and waited for their turn. They gladly slept on some shitty piece of rock, freezing their asses on a wet ground so that alpha would sleep on a higher, warmer and more comfortable spot.

Who would do such a thing?

Well, you are doing it – all the time.

And you don’t resent it because you know your colleague is better than you. In other words, you are perfectly aware that he outranks you in some way. In case of the army and police, you know that they are the ones who provide the safety.

That’s why we always analyze, assess, and measure.

Is your violence greater than mine?

Are you better than me?

Can you ultimately protect me and others?

How to recognize the alpha?

If you are nervous when meeting someone; you’re not the alpha. If he or she is nervous – you are the alpha. It’s that simple. We can sense it.

OK, this is a borderline trivia in terms of mutual interaction and communication but it does say a lot about how we pick the alpha.

So if this is the way things are, then why the hell we all got upset with those goddamn bankers back in 2008[1]?  Why did we feel a sudden urge to hang them all?

Because being an alpha carries a certain responsibility.

Yes, you do eat the best stuff. Yes, you do fuck the best chick in a tribe. But when the shit hits the fan, all eyes are on you.

When banks caused the global collapse and when people heard that there were some substantial bonuses exchanging hands, they felt betrayed. And when you feel betrayed, you first feel disappointment. Then it escalates into a rage. Only then you start to resent the good piece of meat and the best seat in the house – you know that he simply didn’t deserve it.

Same was in the first tribes.

Alpha was the one who had to risk his life in order to save the others.

When you think about it, it’s easy to understand why women like cops, soldiers, and firefighters. They are all sworn to die if necessary in order to protect the others. Women dig that.

Your dilemma is clear: we are living in a society that doesn’t have to fight the saber-toothed tigers.

And that is exactly what launched Martin Luther King as a leader.

He had a dream that one day, a white child will hold a hand of a black child.

Do you see something interesting in this?

He had a dream and he shared that dream with others. They were able to see it.

In addition, he did something nobody else did in terms of rebellion and revolution: he called for peace and understanding and asked his followers to forgive and to love their enemies.

It all starts with the small, closely related group.

Then it expands and gains the momentum. That day in Washington 250,000 people gathered without a single email invitation.[2]

How to become a leader

It’s a simple formula: you have to get better. Better than the current alpha. Better than anybody else. People have to feel you. They have to be able to sense your might and your power.

But how do you do it?

You have to be dedicated to the task no matter what.

Rick Warren, the famous pastor, used to spend 16 hours of the day when he first started his mission in the Saddleback community. Monday to Sunday, nervous breakdown after a nervous breakdown. Careful planning and executions.[3]

And discipline is something you can induce. Because nobody is born disciplined or courageous.

Easy steps to introduce needed discipline in order to rise above

But first, why are some people willing to put their lives on the line for a total stranger?

It’s against basic survival instincts. And yet you are reading about these people every day. Wars, police raids, firestorms, causes – there is always one man who is willing to die for the others.

4 chemicals in our bodies: Endorphins, Dopamine, Serotonin, and Oxytocin are responsible for feelings of fulfillment and happiness.

But one of them can be called the leadership chemical. It’s serotonin.

It is the chemical that makes you rise above or step aside. Serotonin makes you proud of your favorite team.

It’s the chemical felt by you and your parents simultaneously the moment you received your graduation diploma.

They witnessed your success just like you witnessed the success of your favorite team!

There was this vision, this dream that you will successfully graduate. And you made it happen. It wasn’t easy and everybody knew that. But you did it. The small group of people around you – your tribe, felt proud of you.

And that’s the big secret.

[2] “Power of Habits: Why We Do What We Do in Life and Business”, Charles Duhigg

[3] “Power of Habits: Why We Do What We Do in Life and Business”, Charles Duhigg