We spend too much time talking about what not to do, while at the same time spend too little time discussing the things we should do to boost her sex drive and thus, make our sex life better.

These are the 5 ultimate triggers that turn on every woman on this planet – without exceptions!

#1 – Her needs before yours

This is the Alpha & Omega of every couple’s sex life.

Put your needs before hers and your sex life will suck. Shit, there’s a good chance that she’ll be the one looking for some side action. Women hate boredom and routine same way we do, make no mistake about it.

So, be the man and act as she’s expecting you. Put her needs before yours.

That means lick it before you kick it to push her in the lead! And make sure she scores at least one point more than you.

The end result MUST BE 2:1 for her at least.

More the merrier but let’s be realistic here. Sometimes we perform better but sometimes so much time goes by between two sexual intercourses that we cannot last for more than 2 minutes.

Hence, more frequently you do it, longer you’ll last, more points she’ll score. And that shit spells happy life for you!

Yeah, it’s sometimes easier to start the diesel in the middle of the freezing Siberian winter but you can’t do anything about it. All you have in your arsenal is patience.

It sometimes takes up to 15 minutes to turn on her sex drive and slowly drive her into the right mood.

We’re not the same. If we were, there would be more people than rodents on this planet. It’s the nature’s way of keeping the balance.

So take your time, prep the atmosphere (make sure it’s warm enough) and work your magic. You have two hands, 10 fingers and one hard dick. Once she feels it, she’s halfway there.

Just make sure it’s hard as a piece of wood. Anything else is counter-productive.

While we could connect this with her sex drive trigger #1, it does deserve to be awarded the special section. After all, nothing beats eating a great pussy, don’t you agree?

It provides with that unique feeling of absolute intimacy and it does drive her to the orgasm rather quickly, doesn’t it?

If in doubt, keep the following stat in mind:

85% of women experience orgasm during oral sex as opposed to 55% who experience it during the classic penetration.

In case you missed visiting the suggested tutorial, here it is one more time: 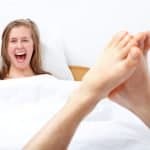 5 Things She Wishes You’d Do While Eating Her Out

Just a glimpse of your hard dick will act as the trigger of her sex drive.

That, of course, doesn’t mean that you’ll use every chance possible to draw it out and wave with it in front of her face. No, we are talking about those subtle moments or moments of intimacy where you’re clearly showing your absolute devotion to her.

And what’s better than a rock-hard dick, right?

Word of caution here: they want a gentleman and not a gentle man.

There’s a profound difference between those two.

You’re expected to act as a strong alpha male at 80% or even 90% of the time. But the remaining 10-20% must be a clear demonstration of your feminine side. In other words, by listening, occasional romantic gestures and hard will to go shopping for some bags and shoes, you’re showing her how much you care for her.

That’s one of the most important sex drive triggers for a woman.

After spending 2 hours with her choosing just the right shoes, you’ll most likely be awarded

Have you ever wondered why it’s so frequent to hear someone having sex in a changing room of some big ass woman-only boutique?

Now you know. They respect that more than anything.

They simply dream to have their Superman who can show more gentle and romantic side from time to time.

So be that. Be a freakin’ Superman but with the eyes for flowers and great looking shoes. You’ll score every time!