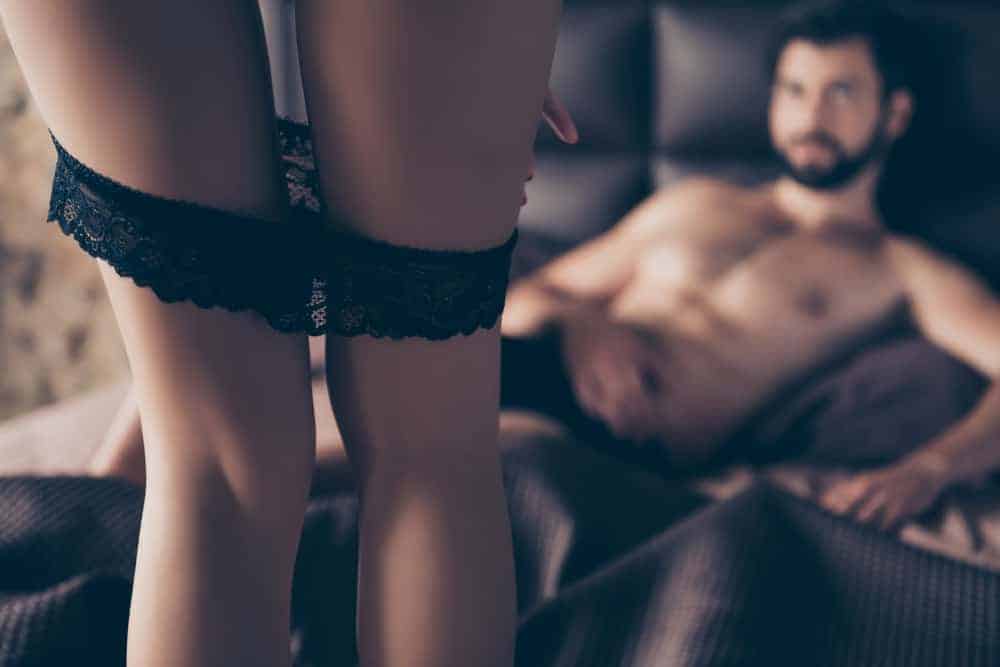 Quite easy actually. It does take some time and perseverance but it pays off. We all know that things tend to fall in a certain routine after 10-20 years of marriage, but a bit of effort can bring you back through time and you’ll end up bumping ugly with the girl you’re just getting to know. It’s that early phase of relationship when it seems that she’s turned on 24/7 and willing to do anything for you – anywhere.

Admit it; you’re longing for those days, ain’t ya? Well, here it is. Do exactly what I did (repeatedly), and that’s it.

And you need to make it seem least obvious. Everything is happening “spontaneously”, at least from her perspective.

So what’s the best time to start working her up and keep her in a constant state of ultimate “horniness”?

2 days before her period starts! Remember that.

There’s something weird going on inside of her. She’s burning. It’s her primitive mating instinct and that’s exactly what you’ll exploit to the max.

The critical thing is: you need to have sex with her (not some routine but sensual sex) that same afternoon as the warmup round!

You start with the main event after hours. Around 9 p.m.

The subject: Her love life before you! Your job is to somehow initiate the talk about her past.

It’s easy. Just mention something about that period of time and link it with love, sex & relationships.

She’s a woman, ergo, she just loves to talk about it.

The trick is to lead her into talking romance and erotica. To talk about how irresistible she was and how guys just glued to her.

Alcohol. Not wine or beer. Something stronger. Liquor will do the trick. Something like Jägermeister or Pina Colada.

She needs to loosen up and nothing is more efficient than a shot after a shot of alcohol.

This is the sensitive part of it. Remember: you’re trying to turn her on like never before. Actually, she’ll be the one who’ll do it.

But, in order for this to work, she’s the one talking and you’re listening and asking questions. You’re positive, analytical, and helpful above all. No taboos exist.

You’re extracting stuff she never told you before. Pulling out the hidden secrets and emotions.

In the same time, you’re connecting the timeline with the moment you fell for her.

The point is that she feels on the top of the world during this marathon session. Yes, be prepared for romance and Literotica talks ‘till morning comes.

Around 5 AM, you suggest the bedroom. Make sure she’s not wasted. Refill responsibly throughout the entire time.

Lie behind her. Grab her firmly and start squeezing that ass and rubbing yourself against her. Let her feel your boner.

She might feel a bit tired and perhaps nag a bit but trust me on this one: give her some time and her clitoris will wake her up. It will pulse between her anus and vagina.

Play with her breasts and nipples. Move slowly down to her clit. Don’t take her clothes off just yet.

When she starts really moving and moaning, strip her just enough to free your way in. Stimulate that clitoris for a while. Hold her tight in full body contact.

Then go in slowly and hold still. Let her move that ass while you’re holding her firmly with your arm around her waist.

Now she just can’t get enough of it. She’ll be pulsing and moving and moaning, pleading for more.

Go take a piss, rehydrate yourself and get back to bed. No worries, even if she did it by herself in a meantime, that’s still inadequate.

Again, start with the spooning position. You have to give your best. Fuck her like there’s no tomorrow. Turn her on a belly and do her from above for a few minutes. Turn her back sideways and use brutal force at the end.