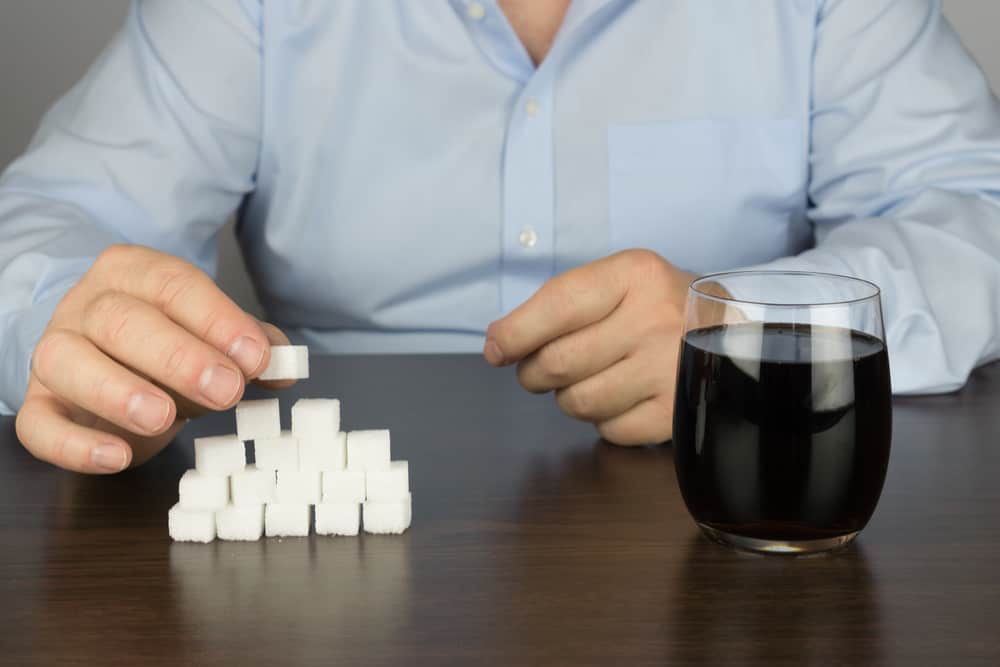 You are doing everything right. Eating just the right stuff, shooting some hoops from time to time, and yet there is that persistent layer of fat all over your body.

What the hell is going on?

The problem is: soft drinks and carbonated beverages contain large quantities of sugars but, at the same time, don’t create the effect of fullness like solid food.

In other words, they possess a low satiety index.

What that means is that when you eat large quantities of food; you are able to go easier with your next meal in order to compensate. Because solid food has a high satiety index.

With drinks, that is impossible.

You see, studies are showing that in the last two decades, an average American consumes up to 26% of the entire carbohydrate load on daily bases through sugar-sweetened beverages.

In addition, between 2001 and 2004, that same average American was ingesting 355 Cal from added sugars, much of which came from soft drinks and carbonated beverages.

Now, this could be applied to almost the entire World. It’s just that Americans are keen researchers and statisticians. The lifestyle is same all around.

How’s that influencing you?

Overweight or underweight is a result of an imbalance of ingested nutrients and the real energy needs of your body.

Those needs include energy production (catabolism) and cellular development (anabolism).

Catabolism and anabolism are what make metabolism.

So when you hear the term “metabolism,” you now know that every bite you take contains something that is used by the cells to either build something or to create energy for that building process, locomotive system, and brain energy.

And as you already know, it has its limits.

However, there is a wrong perception of fats being the main sources of that adipose (fat) layer around you.

While it is true to some extent, sugars are also playing the critical role in the buildup of fat. And many are not even aware of it.

Especially today, when we have added sugars in almost 70% of all processed foods, including beverages.

So how carbohydrates can transform into fat?

1 gram of carbohydrates can yield 0.35 grams of fat.

In the same time, it is important to know that your body can accommodate only 1000 grams of glycogen.

It’s a form of the glucose, made inside the liver that is stored in the liver and muscular tissue to be used as a reserve.

Once those storage capacities are saturated, the rest of glucose will be converted into fat and stored in adipose tissue.

Your body is capable of storing 170 grams of fat per day.

How do we know that?

Thanks to the trial, done by Aarsland et al.[1] in 1997, involving 5 healthy male human subjects (3 Afro-Americans and 2 Caucasians). These five men had been fed with extremely high-energy food consisting mostly of carbohydrates.

During one single weekend, they confirmed the thesis that liver along with the adipose tissue itself can successfully transform glucose into the fat to be stored as a reserve.

In that entire process, liver contributes with only 3% by converting glucose into triglycerides.

Everything else is taken and processed directly by that fat all around you.

Read also: “How They Are Killing Us for Profit with Statin-based Drugs – most prescribed type of the drug in the world.”

As they were closely measuring everything that is happening inside the body, they calculated the average buildup of the fat.

And it doesn’t really matter what kind of sugar is in the food.

If it’s a sugar; then it contains glucose and fructose – the basic monosaccharides of every polysaccharide like sucrose (table sugar) or high-fructose corn syrup (sweetener of the choice in the US).

Your body will break every type of sugar into these two monosaccharides and use them.

Is there any difference if you choose a drink with an artificial sweetener?

These food additives are used to lower the total energy ratio of the processed food (beverages included).

This is possible because artificial sweeteners are a couple of times sweeter than sucrose but, at the same time, they carry low or none of the caloric value.

Nonetheless, they are man-made and we all know how that can end, don’t we? So keep it under control.

Although contrary to generally accepted conspiracy theory, Monsanto isn’t trying to wipe out the human population with Aspartame.

Essentially, you should monitor your daily intake of everything you ingest with a particular focus on sugar-sweetened beverages. Because it’s easy to overload your body with carbohydrates without even being aware of it.