Home » Blog » 17 common dating mistakes – and how to avoid them 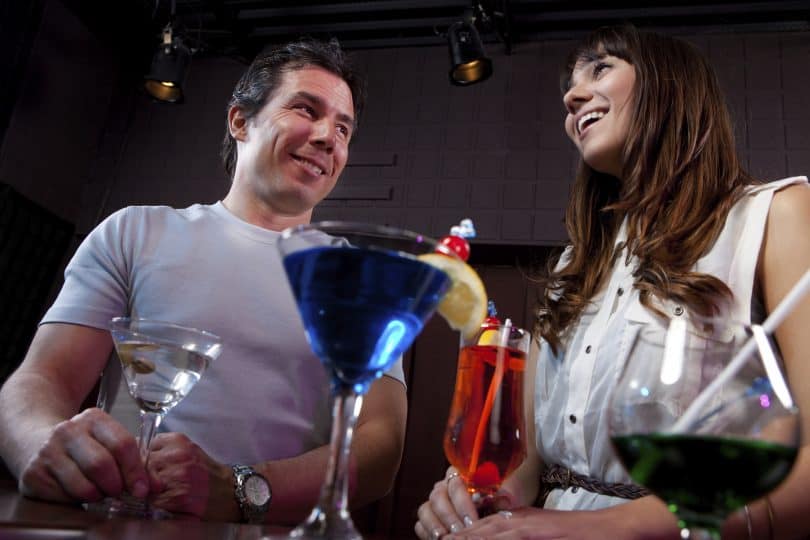 So, whatever you do, DO NOT:

Dating mistake #1 – Spray too much perfume

Do some quality perfume but don’t go overboard with it. Don’t choke those pores.

You’re perhaps oblivious of this fact, but both males and females can detect the distinctive smell coming from those pits. It’s one of the critical first impression factors.

If nothing else, women just hate to be suffocated by the fumes. Keep that in mind and don’t have is as one of your dating mistakes.

You should make her laugh.

And you can use jokes but only as a short input in the middle of some semi-serious discussion. You know, a short sentence or a short funny joke that fits right in.

Dating mistake #3 – Eat her with your eyes

What are you? Some maniac? Too many men commit this dating mistake.

You listen; don’t talk too much. Simple as that.

Just mention a couple of facts and perhaps a few fun events but never ever trash the woman! No negativism of any kind!!

But so do women. And they enjoy it more than we do.

So let her do the most of the talking. Sure you’ll answer the question in a paragraph or two but let her be in the lead.

Dating mistake #6 – Be an open book

Spilling your guts to her is not the way to talk to a woman you hardly know. That’s a direct violation of rule #5. You’ll talk more than her and she’ll resent it.

Women are seeking security on any occasion.

A one-night stand pick, for example, is made after a careful consideration even though it may not seem like that (that of course if she’s not wasted beyond the point of recognition).

Thus, you really don’t want to send the signal to her (at this early stage) that she’ll spend the rest of her life cutting coupons and living frugally. That cold shower comes later.

For now, she must think that she’s having dinner with the man who knows money.

So, we may conclude that women assess the man on account of his height when he stands on his wallet (among everything else). And please, please do not order a chicken. That’s not food and she’s perfectly aware of it.

Most of them don’t really like beer because of the breath and bloating effect.

So they don’t appreciate you drinking it either.

The same applies to a large dish filled with different kinds of meat. For her, this is a clear signal that she’ll have to spend most of her time in the kitchen if you two end up together.

Yes, my oblivious one, that’s the first thing they’re assessing: are you a keeper?

As far as she’s concerned, you don’t even own one.

If nothing else, it will give you more time to focus on the signals she’s broadcasting.

Of course, don’t resent or find it offensive if she answers the message or two. Instead, observe her face while she’s texting and you’ll know how well you performed so far and does she sees herself under your sheets.

Yeah, she’ll text her gal pal, keeping her updated with the event.

Yes, that old man touched you while trying to pass between you and that fat fuck behind you. Don’t start to growl immediately.

You react aggressively only as the final mean or when some prick tries to make the move on your new friend. That’s when you should clearly showcase your protective side and demonstrate some raw male power.

If she doesn’t appreciate it, you two are just not the match – even for the one-night stand.

They do appreciate it because it’s a sign that you think beyond the one-night stand (which you do in reality).

Let her talk about her mother, father, brothers, and sisters. If nothing else, you’ll get more intel.

The facts about her origins will give you a clue of what you can expect in the later stages of a possible long-lasting relationship.

It’s the leverage that you can use to your advantage later on.

A father-daughter bond is unique.

She will assess you through her father because he’s the top man in her life and the only legit model for any future comparison and assessments.

Therefore, do compliment the man and do agree with her when she says how great a father he truly is.

We both know that the old prick will give you hard times later on, but that’s unavoidable anyway so why killing the opportunity to have sex that night, right?

However, do refrain from talking about your father.

Mention him only if she asks or insists that you share something about him.

Don’t do the trash talk as many men do when describing their fathers.

It’s just another thing she’s assessing. That’s why she asked the question in the first place. She just couldn’t care less about your dad but only being polite in one hand, and pragmatic in the other.

Remember, unlike you, she’s constantly assessing your qualities that go beyond just how good the sex will be later that night. So choose your words carefully. Be positive at all times because you can’t sell anything in a negative atmosphere.

You just don’t know her that well, no matter how good you feel about the entire deal. And no, she’s not that drunk to fail to resent your rude behavior.

She might even take it as an insult (God knows why because you’ll spank that same ass only an hour later if you play the game well) and make a scene.

You really don’t want to be marked as yet another asshole like one of my former comrades.

He got fairly drunk one night and his lovely companion seemed to be in the same “mood.” So when she was passing by him on her way to the toilet, he just spanked that ass. She responded with a few nasty insults spoken fairly loud for everyone to hear her. In the aftermath of her reaction, he was left alone with the wet pants because she didn’t miss the opportunity to spill the bottle of wine in his lap.

It does sound amusing and it looked funny when Joey from the TV show “Friends” did that same thing. But don’t do it.

It is tempting because, for some reason, women always pick the better cake. It’s a natural gift, I suppose.

If nothing else, you’ll learn more about her taste in cakes. You’ll know what to expect in years that follow.

It’s hardly ever clear but in her head, she was more than clear about her intention and you have only a small window of opportunity before she changes her mind and marks you as yet another loser.

What are the signs?

Almost never the words, but the gestures, the looks, the movements of her arms and the fact that she did make the first move by “accidentally” touching your forearm on several occasions throughout the evening all accompanied with the laughter and that distinctive “let’s-leave-right-now” look under her eyebrows.

This is the ultimate test.

Fail to “read” her body language (in her head it’s like she’s actually spoken the words) and you’re fried.

Because she really doesn’t want the man who is not capable of reading this secretive and covert language all women are famous for.

It’s like when you’re married for 10+ years and you start complaining to your wife how she won’t have sex with you anymore. She’ll respond in this manner: Do you even know how many times you missed the opportunity?

Dating mistake #16 – Fail to bring the condoms with you

Ohhh this one is a really irritating dating mistake. You know and she knows that you two are heading to your apartment to have sex.

But, your pit-stop at some stand to “buy chewing gums” can break the whole deal. It’s just “too public” in her mind.

Nobody knows why this happens but no matter how hard is her decision to bump ugly with you later that night, any obvious external sign that it will happen will trigger the thinking process in her brain. And you don’t want that because the second she feels even the slightest discomfort, the game is over.

Simply put, she knows why you stopped and she knows exactly what you’re buying. It’s hot for you but the cold shower for her, remember that.

Dating mistake #17 – Fail to open the car door for her

This is the final test of dating mistakes.

Are you a gentleman or just another rude prick who’s looking for yet another name to add to his “score list”?

Read more about what women want in a man here.